Carlo (born in 1880) – establishment and production of wine to sell unbottled.
An enterprising farmer from the Langa hills, the son of a family of poor sharecroppers. In 1921 he bought the Rombone farm in Treiso, then an outlying hamlet of Barbaresco, today a self-governing commune. There he immediately began to produce wine, which he used to sell, unbottled, to local restaurateurs.

Fiorenzo (born in 1923) – the sale of grapes.
The second last of Carlo’ s seven children, four brothers and three daughters, he inherited a small plot of land from his father in the early 1960s, when the property was split up among the four boys of the family. Since the resources left were scarce, Fiorenzo decided to discontinue his father’ s wine cellar business and to sell the grapes, which were much in demand among local merchants at the time.

Bruno (born in 1951) – departure, return to the vineyards, the first bottling. 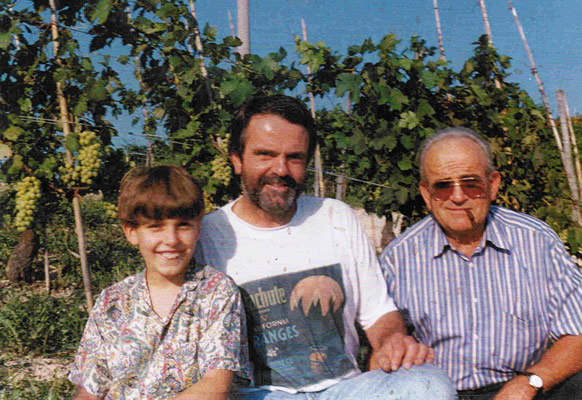 Like most of the local youngsters, he was allured in the 1960s, the years of the economic boom, by the promise of a better life. He thus left Treiso for the city.
After completing his studies, he worked as a teacher in a school in Alba and subsequently at the hotel management school in Barolo, where he introduced food and wine to the syllabus for students aspiring to a career in the catering business.
But his bond with Treiso and his home turf was never broken. In the meantime, the old generation of farmers who had shaped the surrounding hills was slowly beginning to die out, and it seemed there was no one left to accept their inheritance.
The turnaround came when Bruno suggested his family stop selling grapes, which were fetching poor prices, and fit out a cellar to make and sell wine, using fewer bunches of grapes per vine to allow them to ripen better. It was a simple idea and it may seem obvious today. But in these parts at that time it was revolutionary.
Pruvuma (Let’ s give it a go) was the only word his father Fiorenzo had to say. It was 1982, the year Azienda Agricola Nada Fiorenzo produced its first bottle.

Danilo (born in 1986) the fourth generation: winegrowers are born and winegrowers they remain.
The early years of the new millennium crowned the new generation’ s complete discovery of farming and winegrowing: youngsters who were motivated, who could speak English, who were respectful of traditions, mindful of the environment. One such is Bruno’ s son Danilo who, after graduating, decided to follow the way of the vine.
His choice marked another turnaround in a story that began almost a century ago and is now projected towards the future. Danilo has begun to write the chapter of tomorrow today, treasuring the heritage his elders have handed down to him and helped in his task by the generosity of a soil that has been there for millions of years – the soil of the Langa Hills.